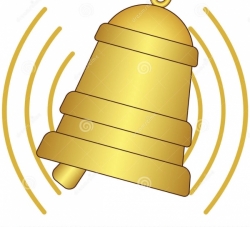 At 80 units were dispatched at 2130 hours assisting Rostraver Central Fire Co with a fire alarm sounding in a local restaurant. Command arrived on scene and found cooking set off the alarm and cancell...
➜
2021-025 Borough Call Vehicle vs Pedestrian

At 1335 hours 80 units were dispatched to a local grocery store for a vehicle vs pedestrian accident. 80 Assistant 1 (Ceccarelli) arrived on scene first and found the patient was moved into the store....
➜
News headlines
New Gear!!!!! 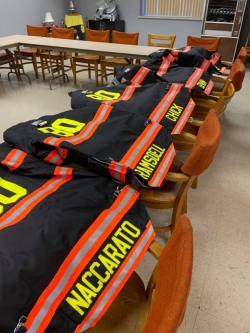 Members have put 6 more sets of new turnout gear in service over the past week. We are continuing to upgrade our equipment and better protect or members.
8th Annual Bike Run
We will be having our annual bike run on July 10th 2021. $20 per rider and $15 for passangers. Sign ins will be held at the Fire Station at 10am Blessing of the Bikes to follow and the ride begins at ...
➜
Public Service Announcement 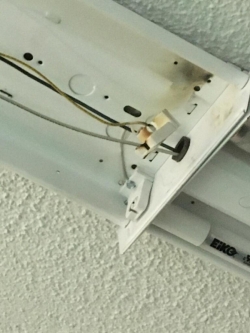 Please be careful when changing your old halogen lightbulb tubes over to LED. You need to use the conversion kit and cannot plug the LED tubes into the halogen ballast this will cause a fire.
2021 Officers have been elected
The 2021 Chiefs and Business Officers were elected at the 2nd meeting in November. The Chiefs will appoint the Captain, Lieutenants, and Safety Officers at the beginning of the year.Chief Kurt Parshal...
➜
80 Leatherheads

History of the Leather Helmet

Jacobus Turck of New York City is credited with inventing the first fire cap around 1740.  It was round with a high crown and narrow rim and was made of leather.  Improvements on his design were made by Mathew DuBois, who sewed iron wire into the edge of the brim to give the helmet shape and strength, and to provide resistance to heat, moisture and warping.  The leather helmet, as it is known today, came from a very modest and non-fire related beginning.  The year that the traditional fire helmet was invented is mired in speculation and debate however it is generally agreed upon as sometime between 1821 and 1836.  The gentleman credited with it's founding is Henry T. Gratacap.  Gratacap was a volunteer fireman in New York City.  His made his living as a luggage maker who made a name for himself because of his innovative luggage specifically designed for ocean transit.  It was made of leather that was specially treated to offer unparalleled durability and withstood wetness without rotting.  These qualities were very desirable in a fire helmet as well.  Gratacap incorporated eight (8) combs [ a design of eight (8) segments ] into his helmet for extra strength.  It was adopted for official use by the New York City Fire Department in the late 1800's and given the name the 'New Yorker".

The New Yorker helmet has remained virtually unchanged throughout approximately 168 years of faithful and steadfast service.  The New Yorker helmet retains the same look and quality that generations after generations of firefighters have relied on.  They are made of stout tanned Western cowhide, one quarter of an inch thick, and reinforced with leather strips which rise like Gothic arches inside of the crown.  The long duckbill, or beavertail, which sticks out at the rear, is designed to keep water from running down the wearer's neck.  Originally, the helmets were sometimes worn backwards so that the beavertail would protect it's wearer from the intense heat from the fire.  Additionally, some tillermen would also wear them backwards to protect their faces from rain and snow.

During this time, two brothers named Cairns were operating a metal badge and insignia business in New York City.  The Cairns brothers are credited with the idea of mounting an identification badge to the front of Gratacap's helmets.  Today these are known as "Front Pieces".

The two companies operated cooperatively until Gratacaps retirement sometime in the 1850's.  This led to the birth of the Cairns & Brother legacy which has pioneered firefighter helmet technology ever since.  Cairns and Brother's commitment to protecting fire fighter's lives is evident in their systems, where engineered components synergistically work together for unparalleled protection in harsh environments.  The original OSHA compliant leather helmet, it remains individually hand-shaped, hand-trimmed and hand-stitched to meet the strenuous demands of todays most dangerous profession.

The "Leatherhead" is a term used to individualize a firefighter who chooses the leather helmet for protection from the hazards we face daily.  The leather helmet is an international sign of a firefighter, a symbol that is significant in not only tradition from the early years of fire fighting, but one of bravery, integrity, honor and pride.  This helmet is a sign of who we are - not what we are.

Although several types of components exist to attach the front piece to the helmet, fire fighters who truly live the tradition wear a carved brass eagle to adorn the top of the helmet.  The eagle has it's own significance in history but no traceable story through the fire service.  In approximately 1825, an unknown sculptor made a commemorative figure for the grave of a fire fighter.  It remains in New York's Trinity Churchyard today.  It shows the fire fighter issuing from the flames, his trumpet in one hand, a sleeping baby in the other and atop his helmet - an eagle.  Fire Fighters were not wearing eagles at the time and it was a flight of pure fancy on the part of the sculptor.  As the image was viewed and word was spread, the idea was widely adopted.  It has remained a traditional component of the helmet ever since.

This site has been viewed 128,453 times.
Calls
News
Events
Pictures
Apparatus
Maintained by the members and staff of North Belle Vernon Fire Department. Designated trademarks and brands are the property of their respective owners. Copyright © 2006-2021. YourFirstDue Inc. All Rights Reserved. Content on this web site is supplied by North Belle Vernon Fire Department. YourFirstDue Inc. cannot be held responsible or liable for any content, text, pictures, or any other media found on this web site.
Management login
Powered by